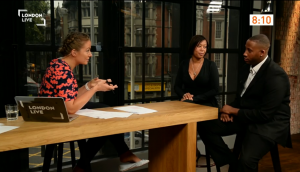 To coincide with the release of the London Assembly Regeneration Committee’s report on the Mayor of London’s Regeneration Fund, last Friday (15th August) representatives from the 639 Enterprise Centre were invited to appear on London’s local channel London Live.

Following the riots in 2011, Boris Johnson, Mayor of London announced £70 million of funding towards improvements to the areas of the capital which had been damaged. The 639 Enterprise Centre was one the projects that was born out of the Mayor’s Regeneration Fund after the London Youth Support Trust won a competitive tender to run the building, supporting residents through enterprise, employment and volunteering support.

Coverage of the report, Out of the ashes: The Mayor’s Regeneration Fund focused on one key finding; that the fund has not been spent fast enough. Out of the £70 million allocated, £11.4 million has been spent thus far.

Speaking about the findings on London Live, Nicolette Nichols, Centre Manager of 639 said, “…it’s not just about throwing money at the problem […] It’s about engaging with the community, it’s about working with people, trying to understand what’s needed in the area […] you don’t resolve these issues overnight.”

Talking about the importance of creating sustainable projects in riot-hit areas, Nicolette stated, “You try and develop something that’s long-term and sustainable, and that’s what 639 is working towards.”

Nicolette was joined by entrepreneurs Victor Atiemo and Pierre Remy from security firm Secure on Site (SOS), based in the 639 Enterprise Centre.

Pierre highlighted the benefits of being based in a LYST centre:

“LYST had provided us with an affordable office space. If we wanted to rent somewhere else […] it’s a bit expensive, especially if you’re trying to start-up”

As someone who grew up in the area, Victor spoke of the importance of employing local people and trying to get local people into work – one of the core objectives of the 639 Enterprise Centre.